What is the Definition of Hardness Testing? 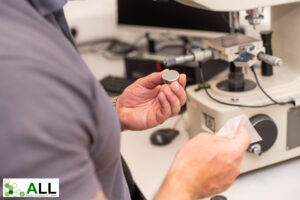 The definition of hardness testing is “a test to determine the resistance a material exhibits to permanent deformation by penetration of another harder material.”

Hardness testing enables you to evaluate a material’s properties, such as strength and ductility, aiding you to determine whether a material or material treatment is suitable for the purpose you require.

How is Hardness Testing Performed?

A hardness test is typically performed by pressing a specifically dimensioned object (indenter) into the surface of the material you are testing. The hardness is determined by measuring the depth of indenter penetration or by measuring the size of the impression left by the indenter. 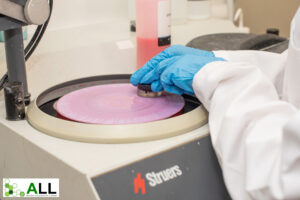 • ROCKWELL. The Rockwell Hardness test is a commonly used hardness test method, as it is a quick and simple method to determine the hardness of metal materials. The Rockwell hardness (HR) is calculated by measuring the depth of an indent after an indenter has been forced into the specimen material at a given load.

• VICKERS / MICROVICKERS. Vickers hardness testing is a popular choice of test method for all metals, and has the broadest range of hardness scale measurements out of all the hardness testing procedures. The Vickers Hardness (HV) is calculated by measuring the diagonal lengths of an indent in the sample material left by introducing a diamond pyramid indenter with a given load. The diagonals of the indent are measured optically in order to determine the hardness, using a table or formula.

• KNOOP. Knoop testing is a form of micro hardness testing. Knoop testing is carried out using an elongated pyramid diamond, which is pressed into the surface of the material to create an impression, which is then measured to give a defined hardness result. It is mainly used to overcome
cracking in brittle materials, as well as to facilitate the hardness testing of thin layers.

• BRINELL. Brinell is one of the oldest methods of hardness testing, and is ideal for testing forgings, castings and larger coarse samples of materials. The Brinell hardness test (HBW) indentation leaves a relatively large impression (removing the variability caused by localised, structural differences and surface inconsistencies), using a tungsten carbide ball. The size of the indent is read optically. 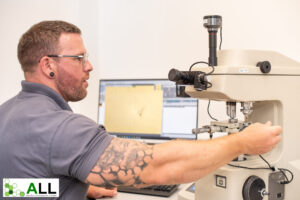 Micro-hardness testing provides precise, accurate information for materials that have fine microstructures.  Microhardness is frequently used to assess the properties of coatings or thin layers of materials at lighter loads compared to macro hardness tests such as Brinell, Rockwell
and Vickers. Aerofin utilise microhardness testing to assess a material or coatings suitability for function in service e.g. chrome, nickel and hard anodise where impact and wear resistance (rotational and reciprocal) are important.

Vickers Microhardness testing is the process of indenting a pyramid shaped diamond with equal diagonal lengths into a material or coating with a constant load. Similar to macro-Vickers under low load. Vickers Microhardness is utilised on coatings and coating cross sections with small area requirements to indent and materials that require low force loads.

Test methods conducted at Aerofin include:

Knoop testing is the process of indenting a diamond with one elongated diagonal length into a material or coating with a constant load creating an impression, which is then measured to give a defined hardness result. Due to its long and narrow shape Knoop hardness is employed where area is significantly reduced such as thin coatings and very brittle materials.
• Test methods conducted at Aerofin include:
• ASTM B 578 Standard Test Method for Microindentation Hardness of Electroplated Coatings
• ASTM E384 Standard Test Method for Microindentation Hardness of Materials
• ASTM E92 Standard Test Methods for Vickers Hardness and Knoop Hardness of Metallic Materials
• ISO 4516 Vickers and Knoop microhardness tests

If you have any questions or would to talk to us about our services, please get in touch here.