The test standard summaries are for general guidance only. Though believed to be accurate at the time of writing, this may change over time. So this information should not be used as a substitute for referring to a complete test standard, at an appropriate revision level.

Note: the terms salt spray, salt mist and salt fog are all in wide spread use within corrosion test standards. In this context they can be considered to be equivalent and interchangeable terms. 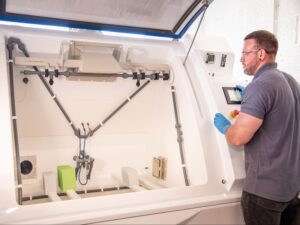 Volvo STD 1027,1375 concerns determination of atmospheric corrosion resistance at an accelerated test. The test method has been developed to simulate the corrosion processes that take place on vehicles in a road environment where sodium chloride constitutes a dominating corrosive component.

For test objects exposed to special environmental conditions such as significant temperature changes in the engine compartment, or for materials like sealants and adhesives, an additional stage of exposure to wet conditions/low temperature/high temperature shall be included in the test procedure.

The test objects are placed in a test chamber permitting cycling of the relative humidity between two defined levels. The temperature is maintained at a constant level during the humidity cycling or, as an alternative, raised when changing to the lower humidity level. The controlled exposure to humidity is discontinued twice weekly by a wet exposure of the test objects using leaching acidified salt solution.

This solution is applied by means of spraying equipment or, as an alternative, by manual immersion so that, in addition to renewed salt exposure also leaching of corrosive products takes place on the test objects. This step is followed by a period of keeping the test objects wet and a subsequent period of forced drying (only when using automated precipitation) after which cycling of the humidity level is resumed.

In an alternative to the basic test method, the repeated exposure to leaching salt solution is replaced with an application of artificial dirt containing salt on the test objects. This procedure is applied before testing and is renewed every third week of testing.

This test is also referred to as a Volvo Indoor Corrosion Test, often abbreviated to VICT.

Back to Cyclic Corrosion Testing